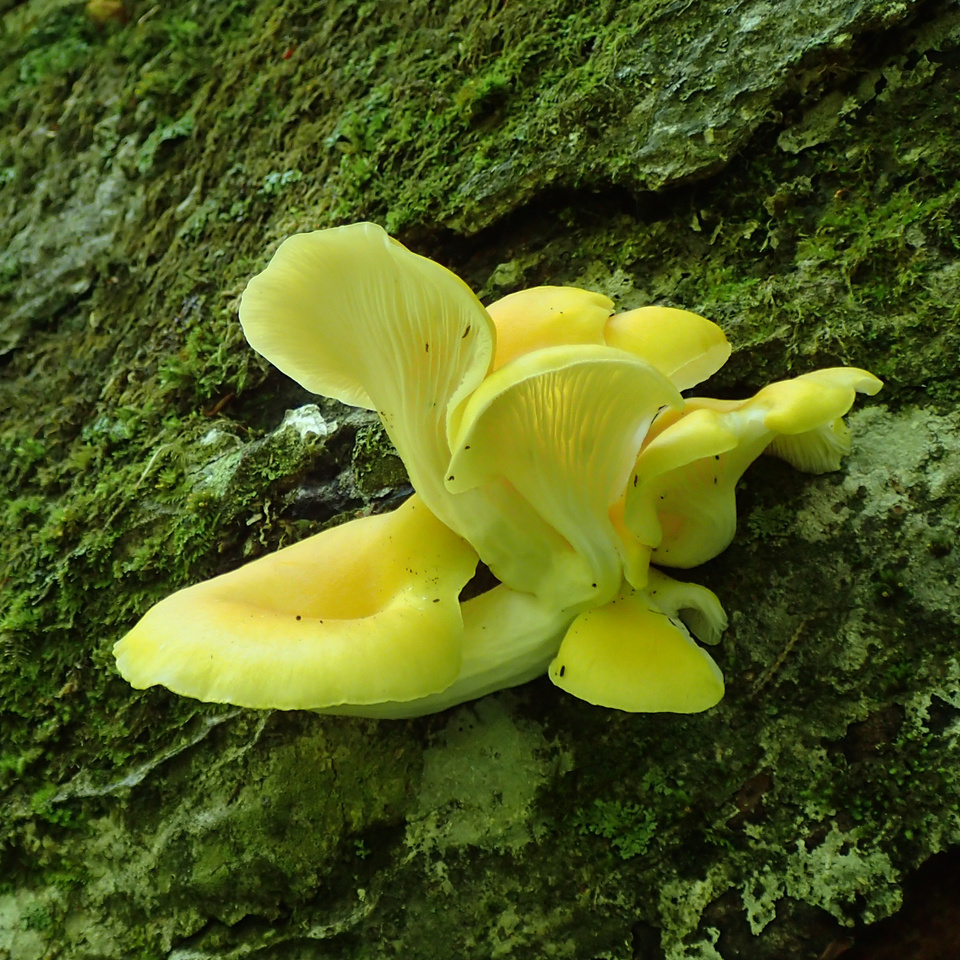 Characterized by the bright yellow cup and white lamellas, it is known as a food fungus. Appearing on fallen trees, it is strongly aromatic and instantly lures worms. 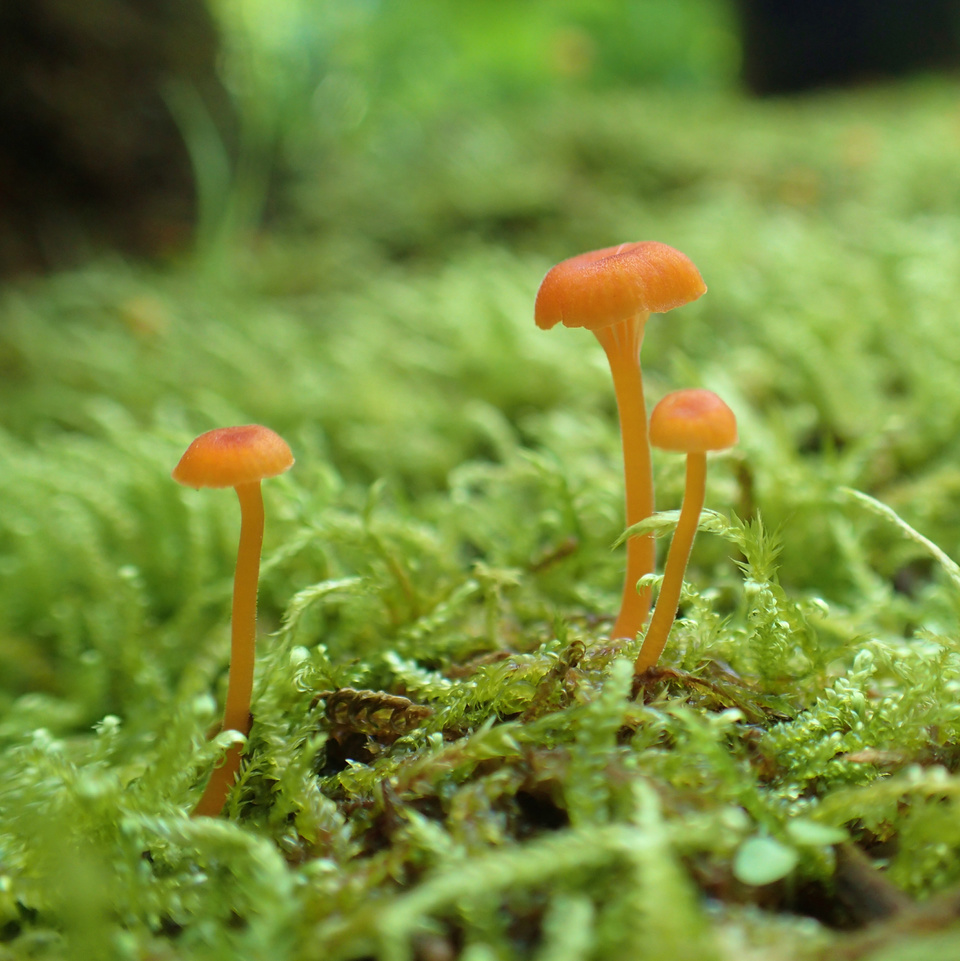 A small fungus that can often be found on mossy bridge-rails. 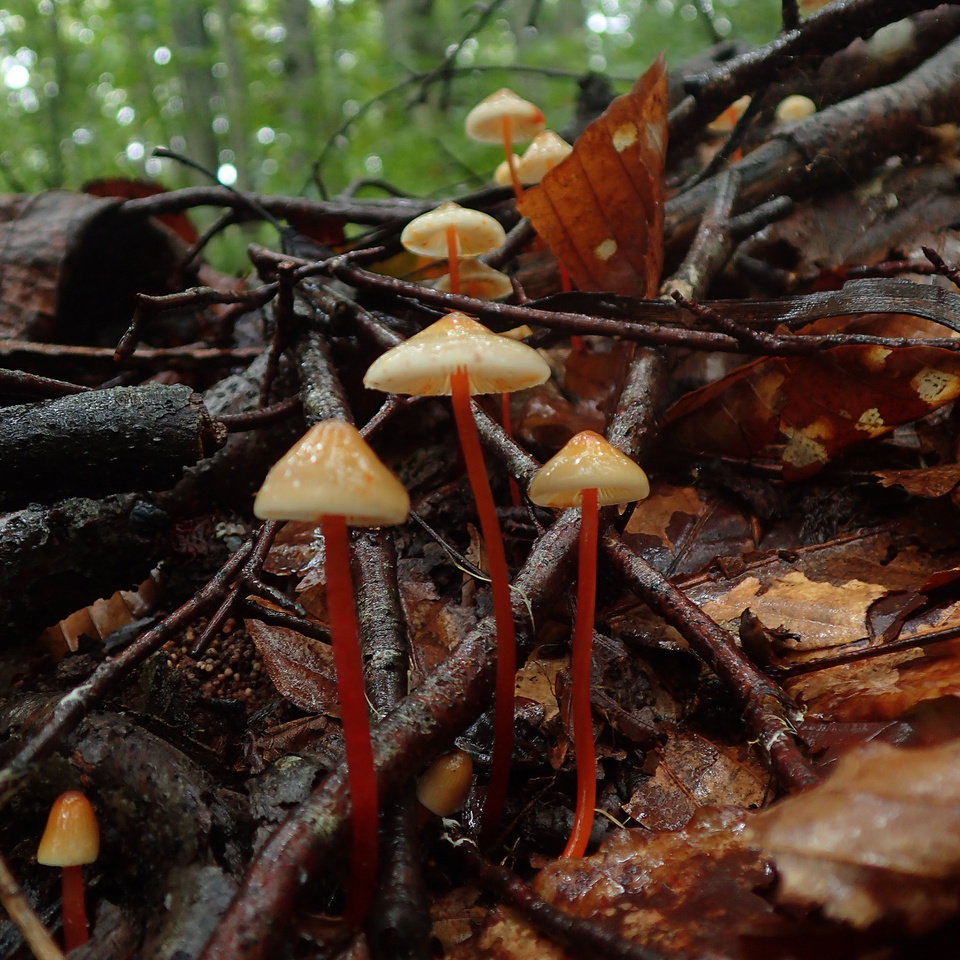 Gives off an orange-colored liquid like Chishio (the blood) when scratched. Many of them are found on fallen trees. 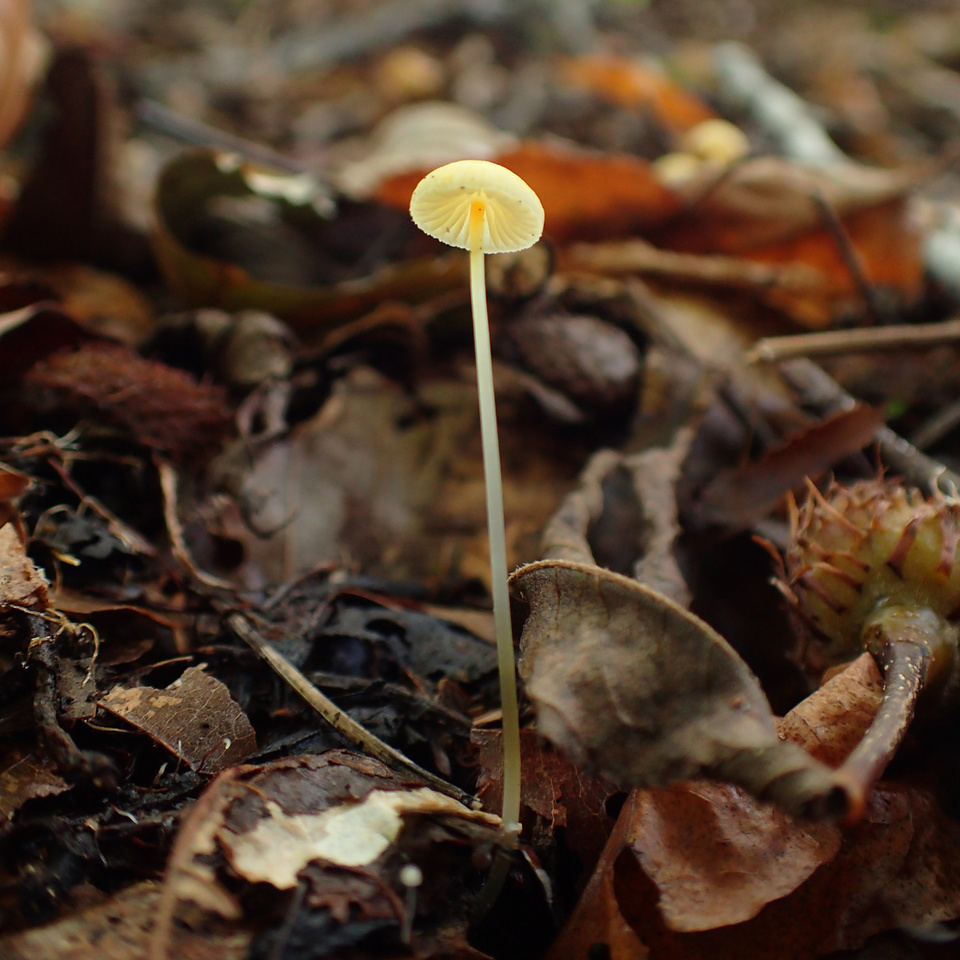 Grows on beech seeds. Its delicately beautiful fungus is too small to see.

The name means fungus of a yellowish old man without wrinkles. The yellow color of the cup of the fungus is quite vivid. It sometimes emerges from seedlings of the Japanese big leaf magnolia. 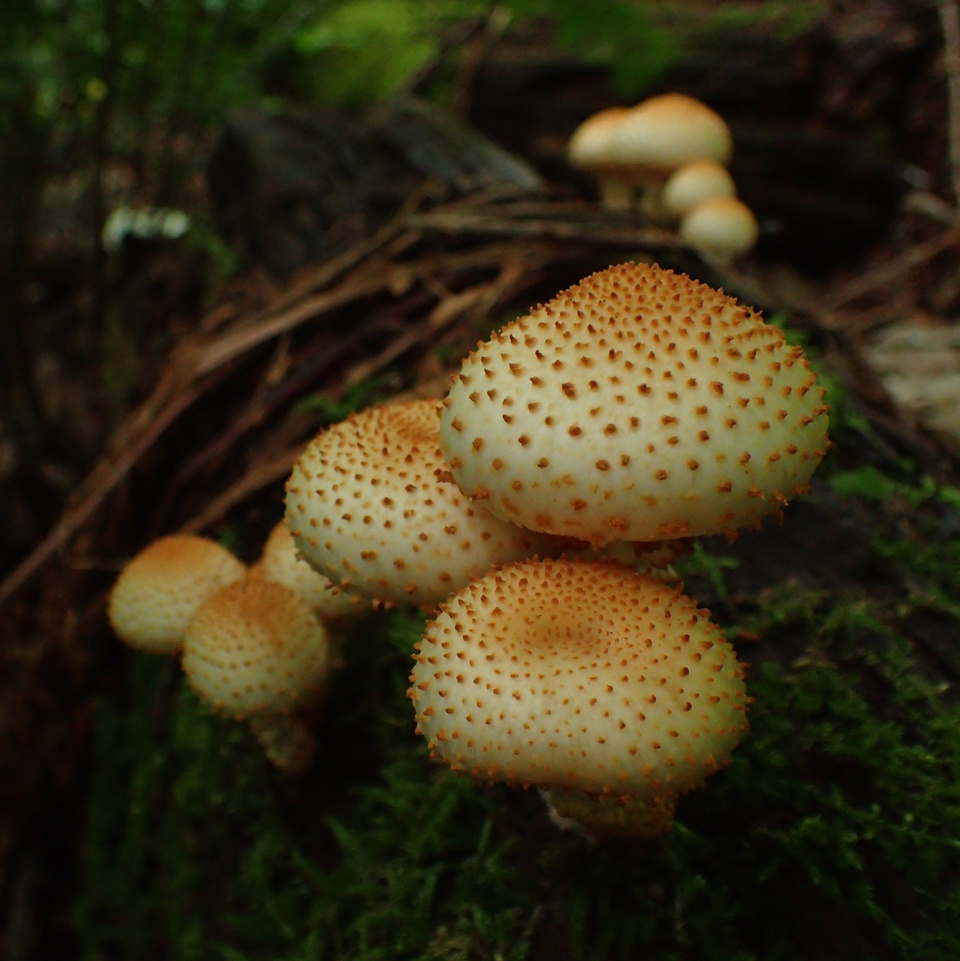 Cups and stalks are covered with pointy, spiny ramentum. Its difference from the other genus Pholiota is indicated by the fact that the foundation of this fungus goes from white to light yellow. 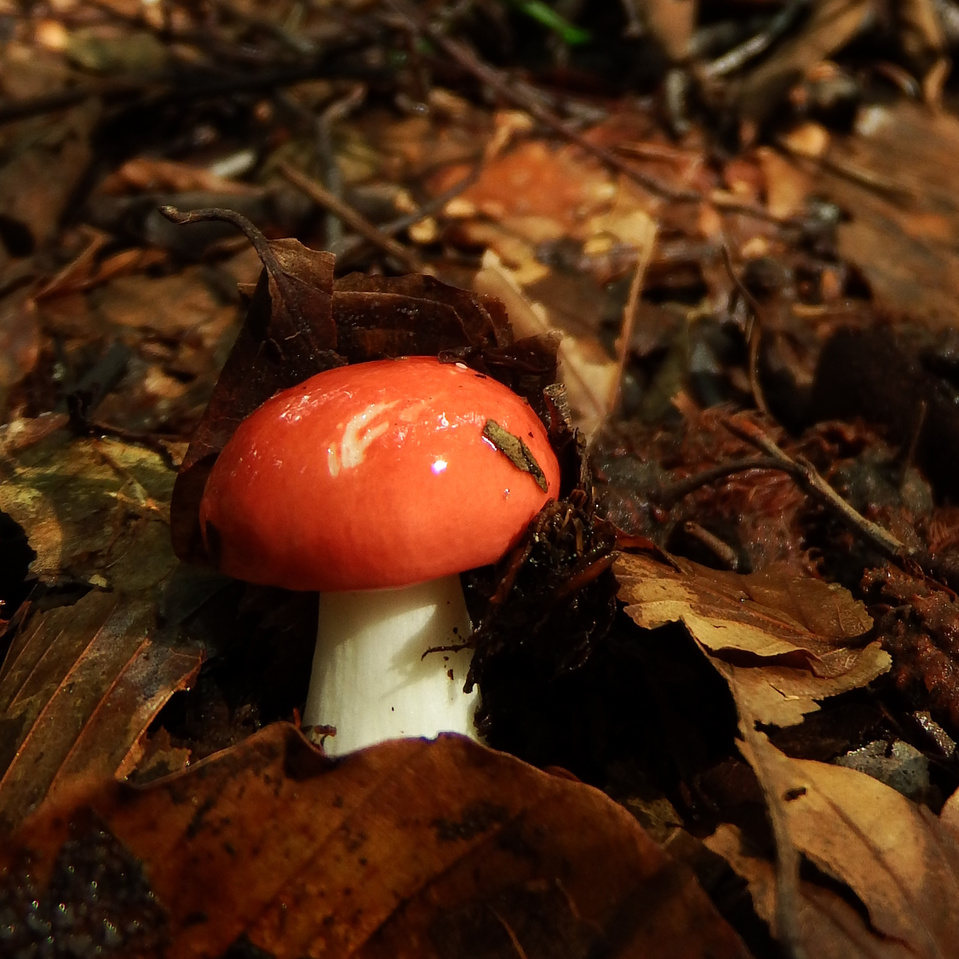 Has a pretty body shape, and co-exists with trees in the beech family. 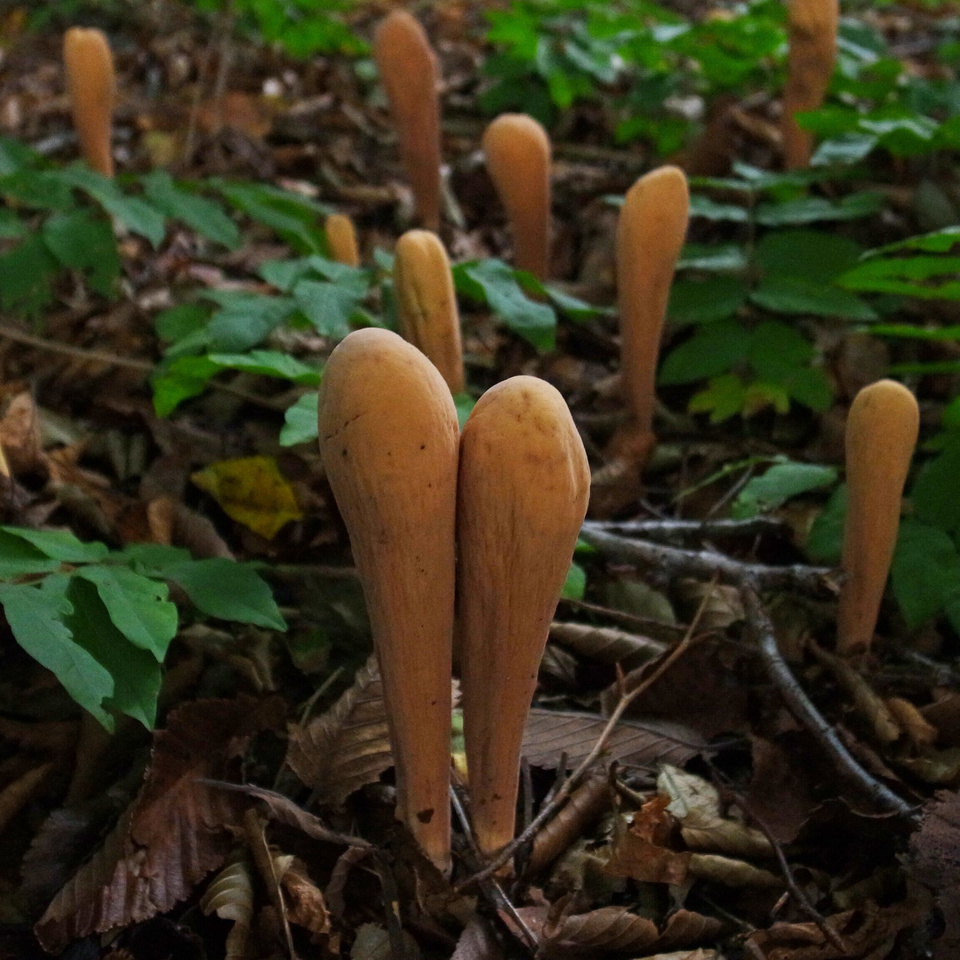 The name makes one think of an image of Surikogi (a wooden pestle). This fungus has a club-shaped, slightly swollen tip. It appears in forest beds and sometimes grows in clusters. 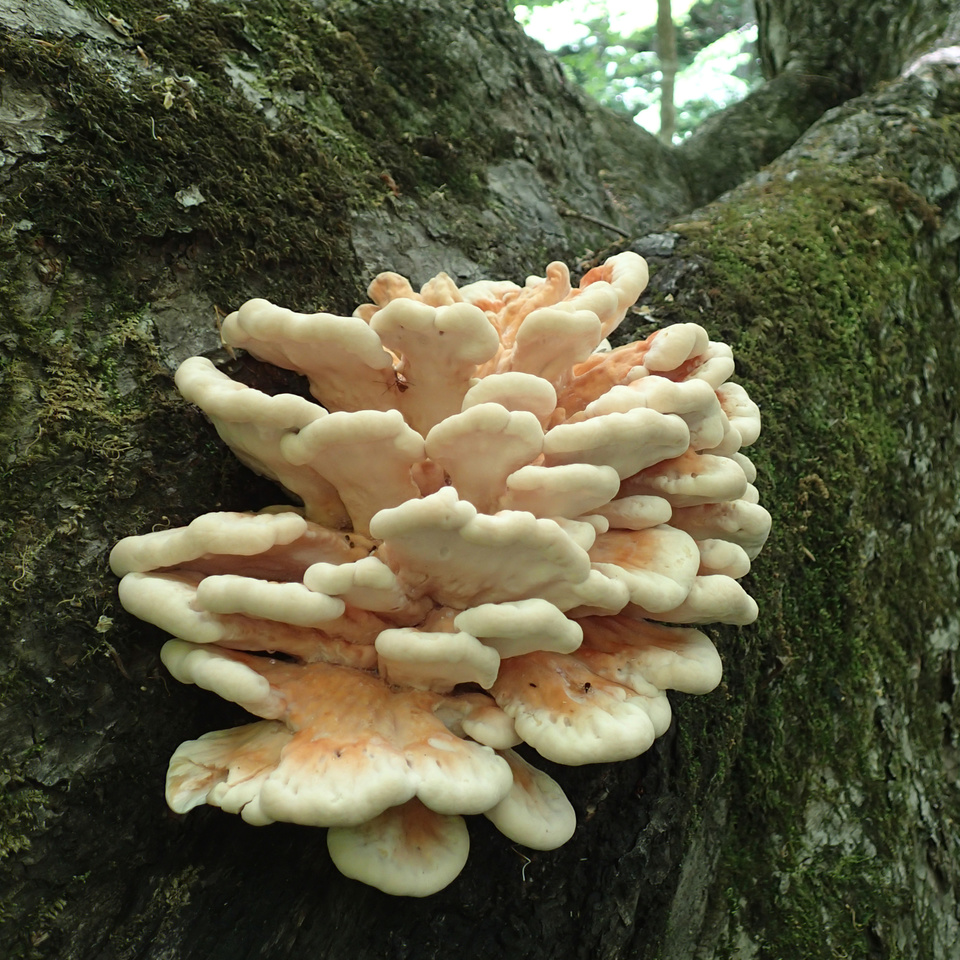 The name is derived from its bright vermillion color, reminding one of trout meat. Belonging to the Polypore (the genus Polyporaceae), it appears on tree trunks and fallen trees. 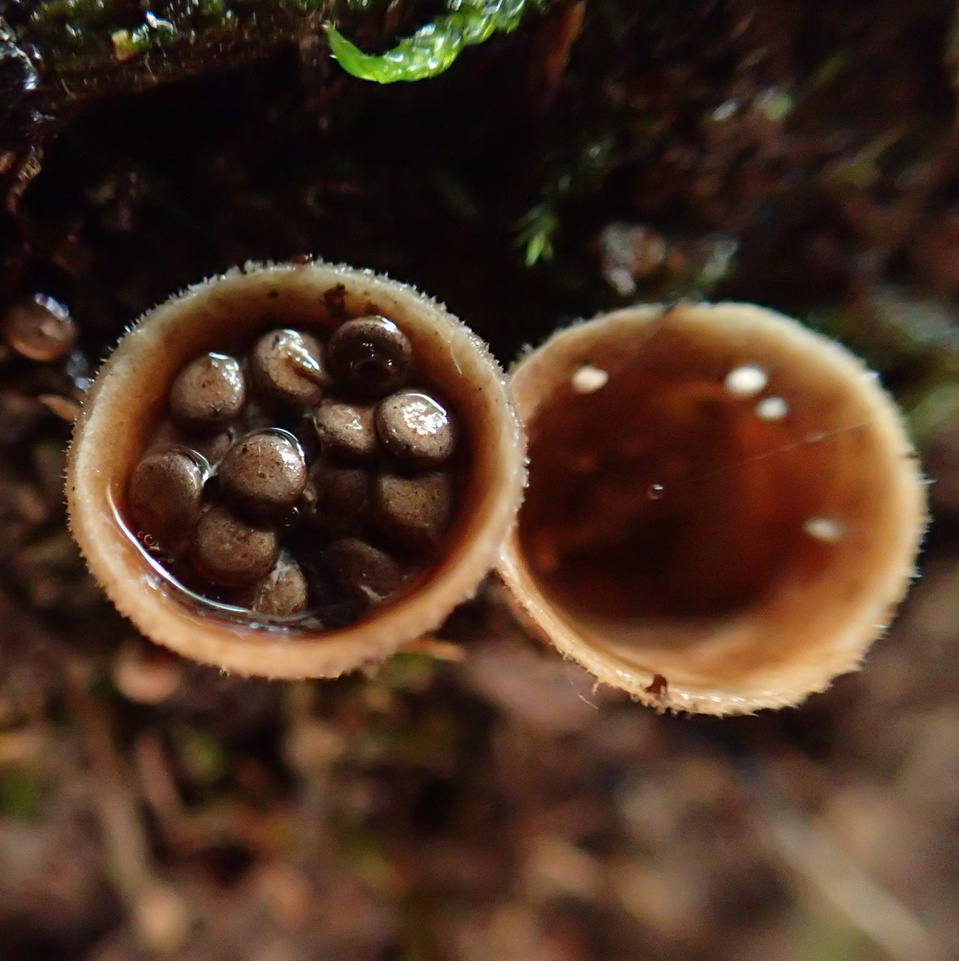 Begins as granular lumps and later the top opens to reveal the shape of a sake cup. Inside it are several Go-stone-looking grains. 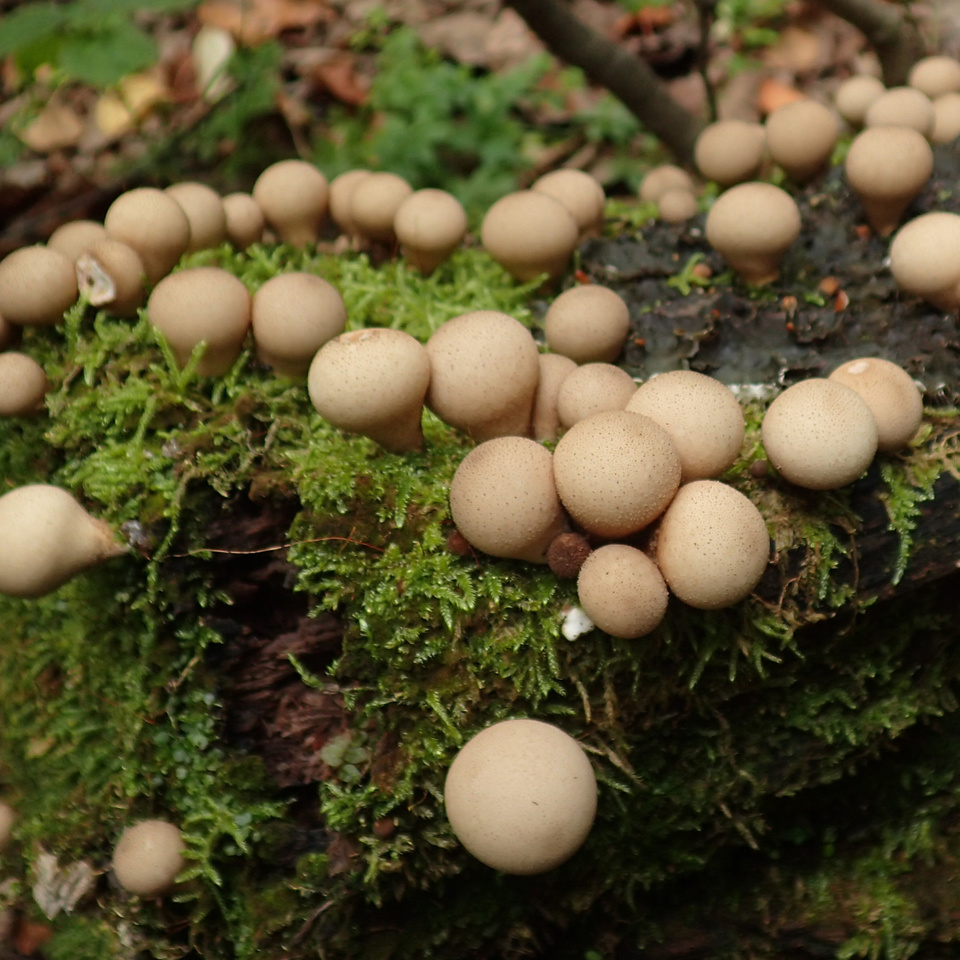 Begins to stand out on fallen trees around October. After ripening, it sends out spores through a stimulus, such as rain. 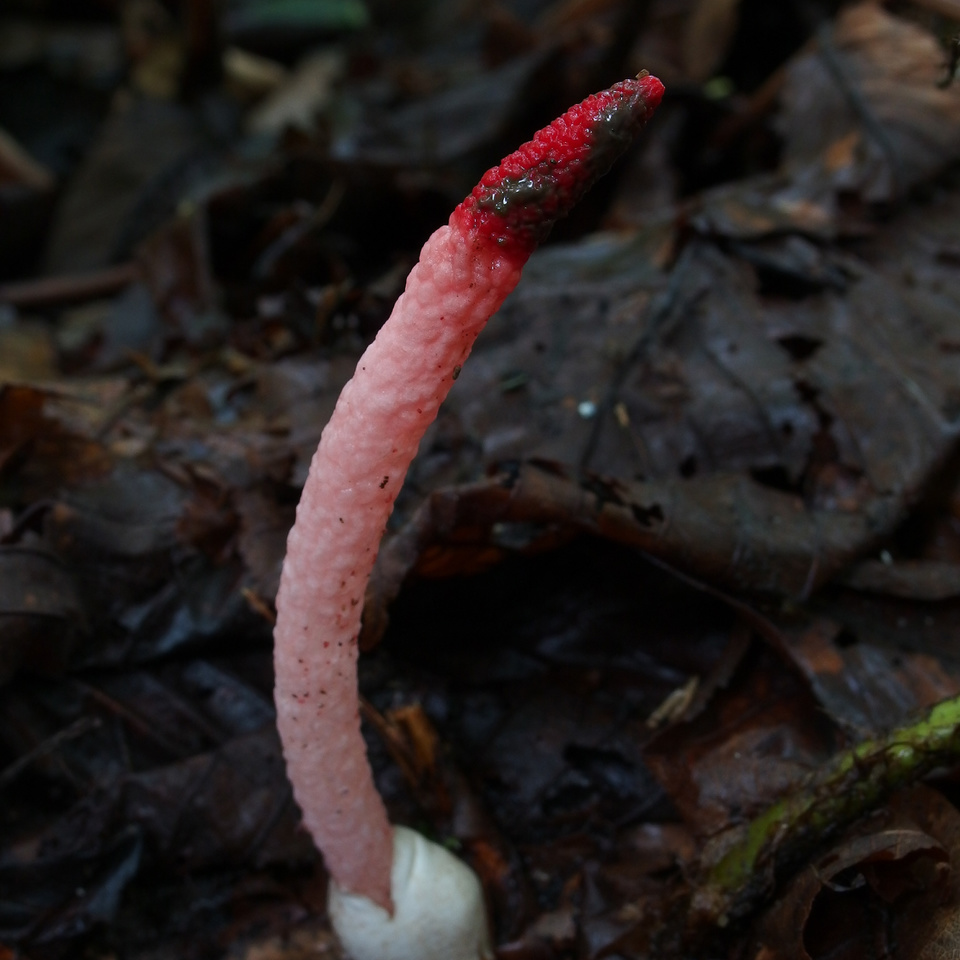 From the candle-like tip emerges a bad-smelling mucus. Flies and the like lured by the smell gather there and disperse spores contained in the mucus. 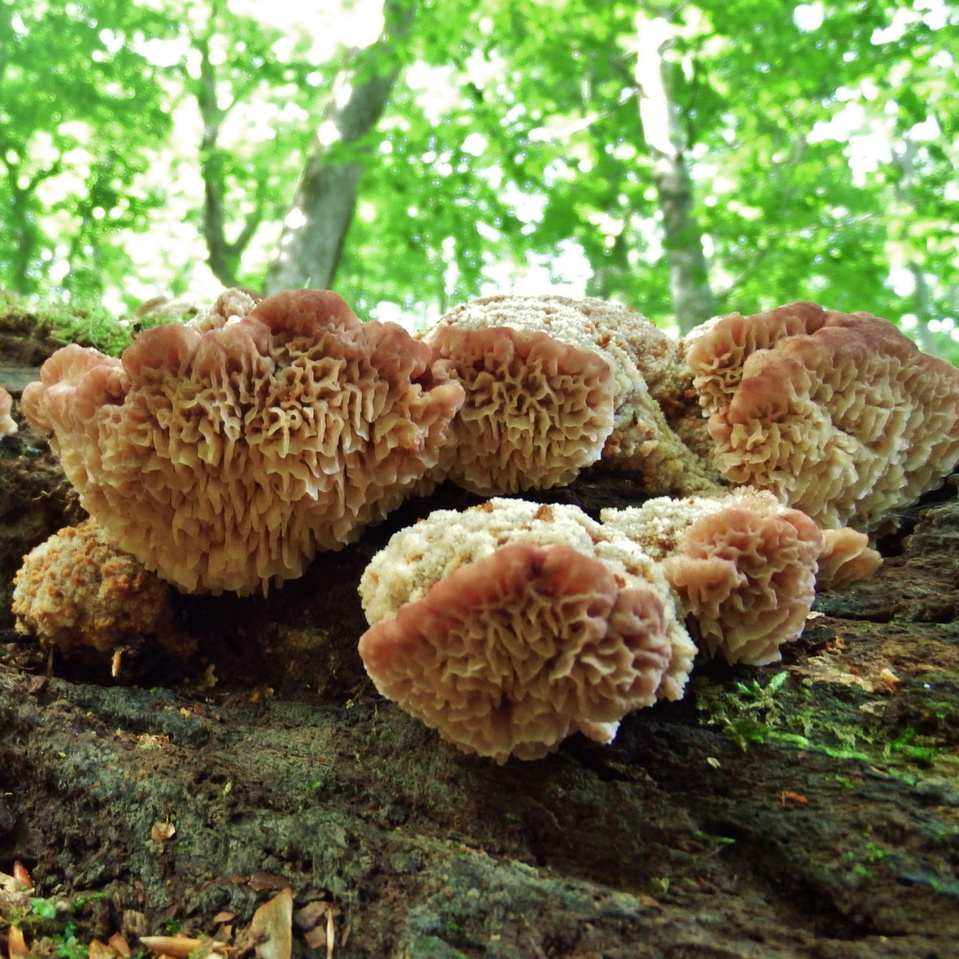 Has a slightly meaningful name: Mukashi (in old times)-o-midare (a great disarrangement)-take (fungi). It is characterized by its labyrinth-like unkempt gills that complicatedly crinkle on the underside of the fungus. 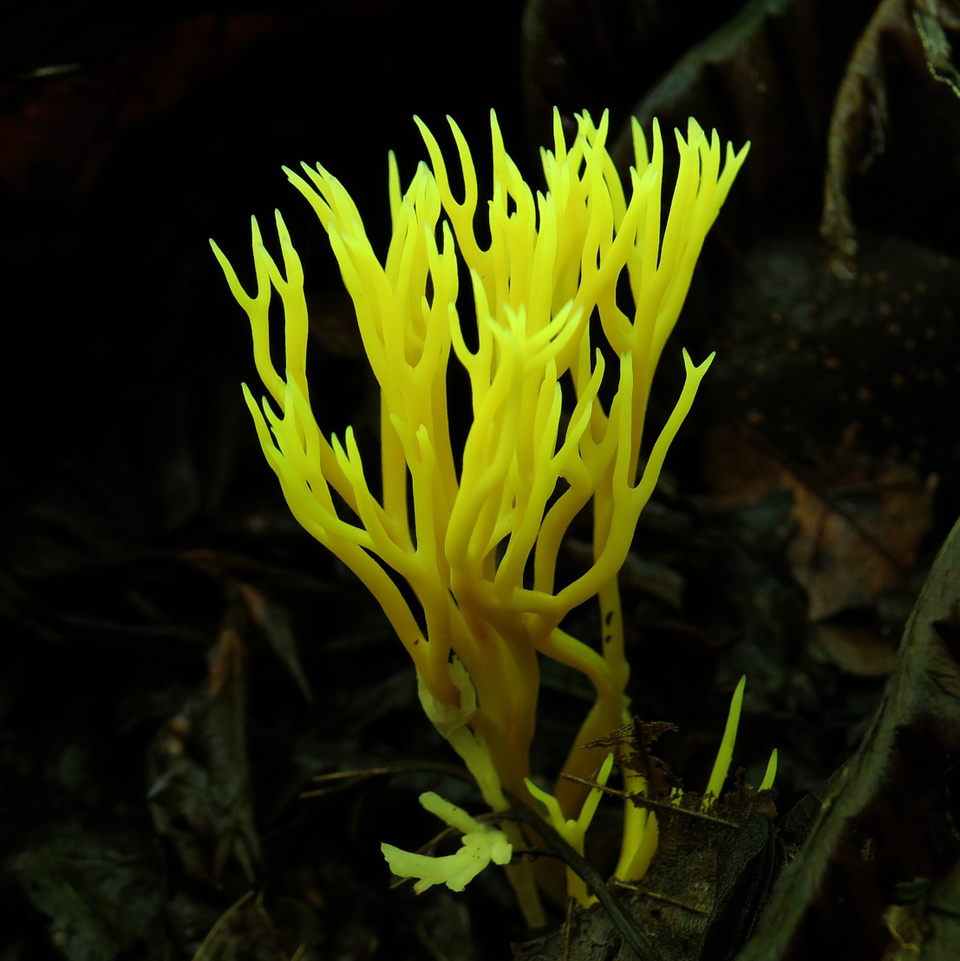 The name means Nikawa (glue) - hoki (broom) - take (fungi), and it gives the impression of coral, resembling Hoki-take (Ramaria botrytis). It is bright orange and has a soft, springy feeling. 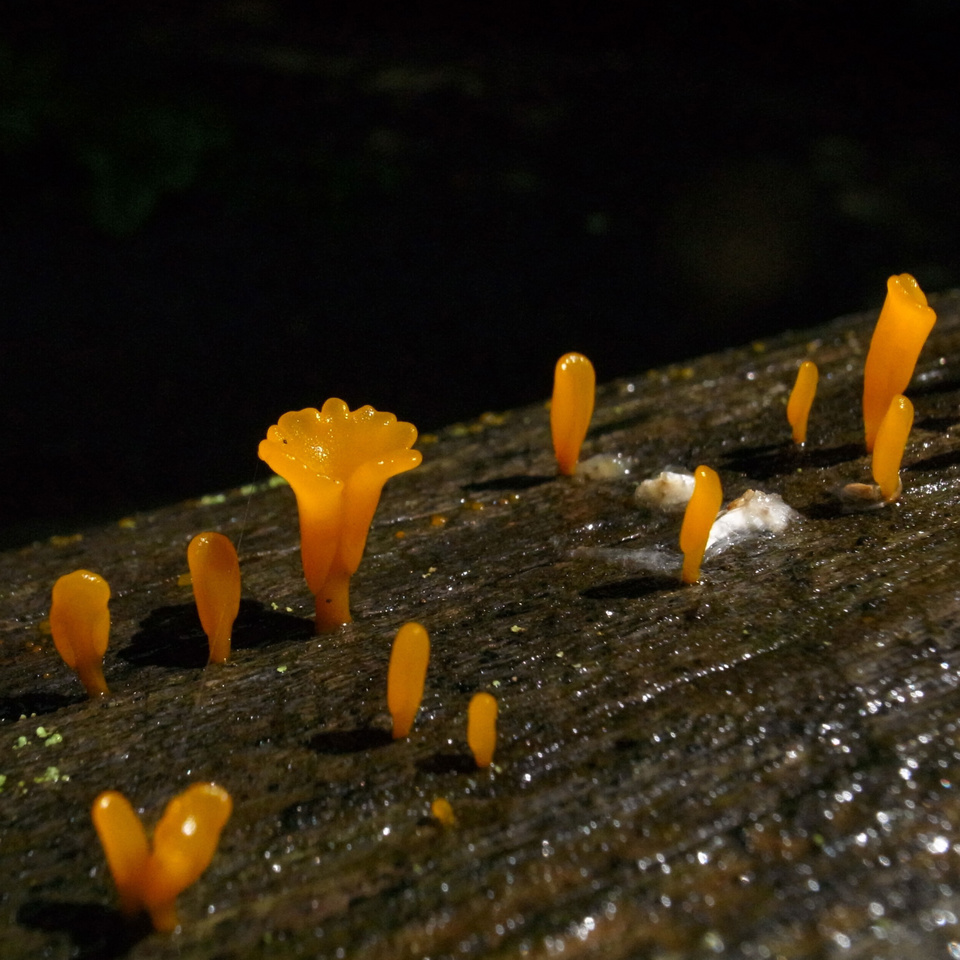 Orange, spatula-shaped, mysterious fungi that appear on old wooden bridges and benches. It has a glue-like appearance closely reminiscent of the wood ear mushroom.

A wood-rotting fungus with verdigris color, this fungal thread also exudes a pigment and dyes the wood verdigris. 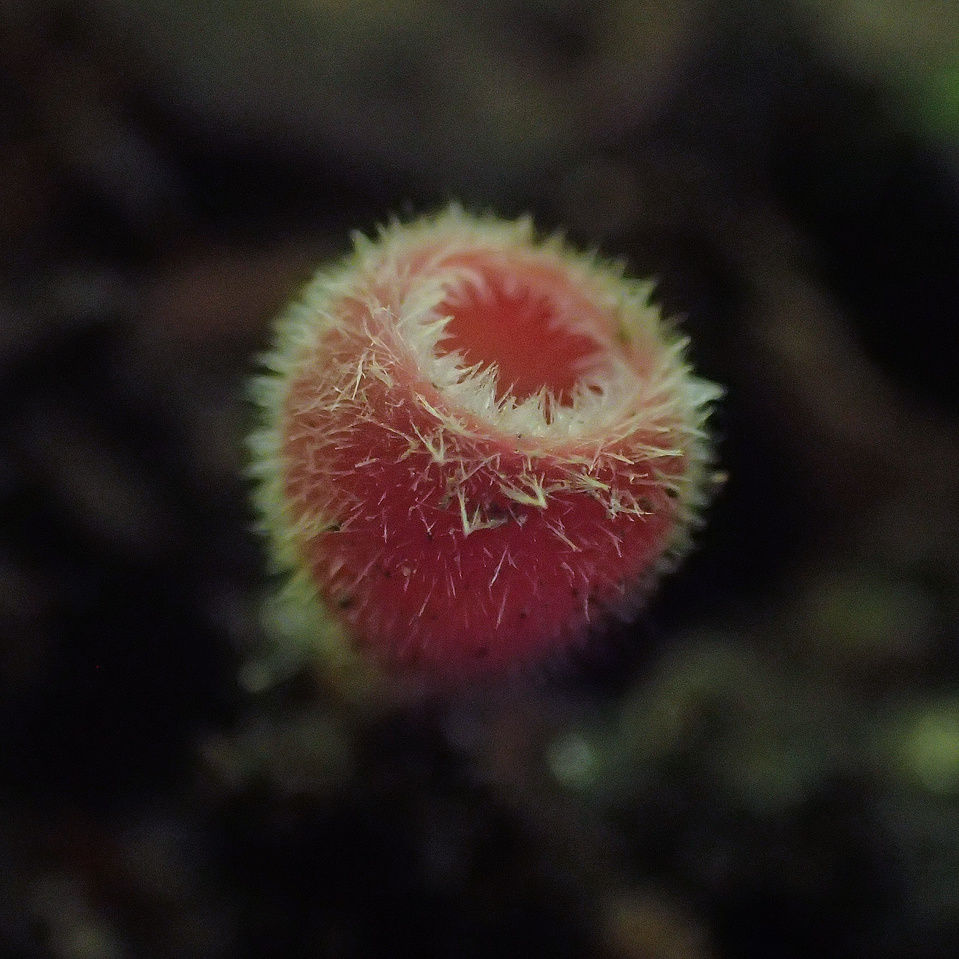 A cup-shaped bright red mushroom with pure white hair, the spores are made inside of it. The name is derived from comparing the mysterious impression to “fox’s sake cup.” 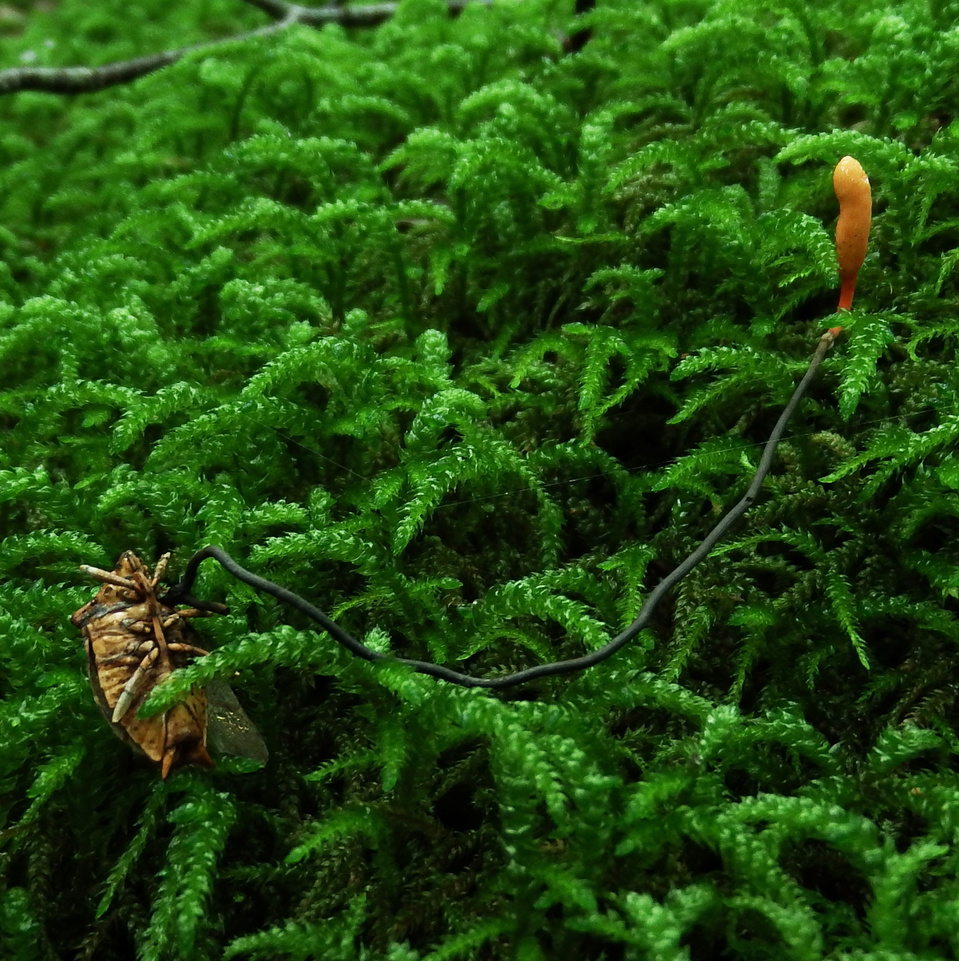 A plant worm (a fungus that lives on a living worm), it also grows on stink bugs and the like. 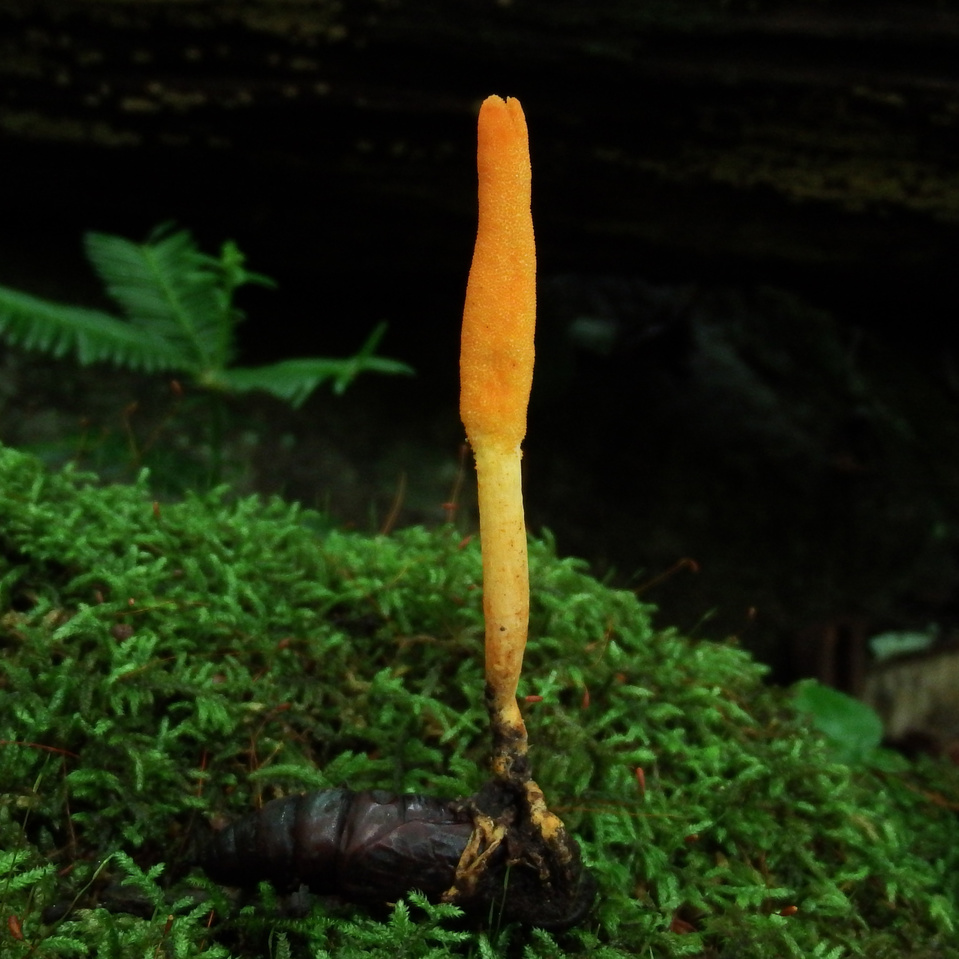 A fungus that lives on a live moth and grows on moth pupas. 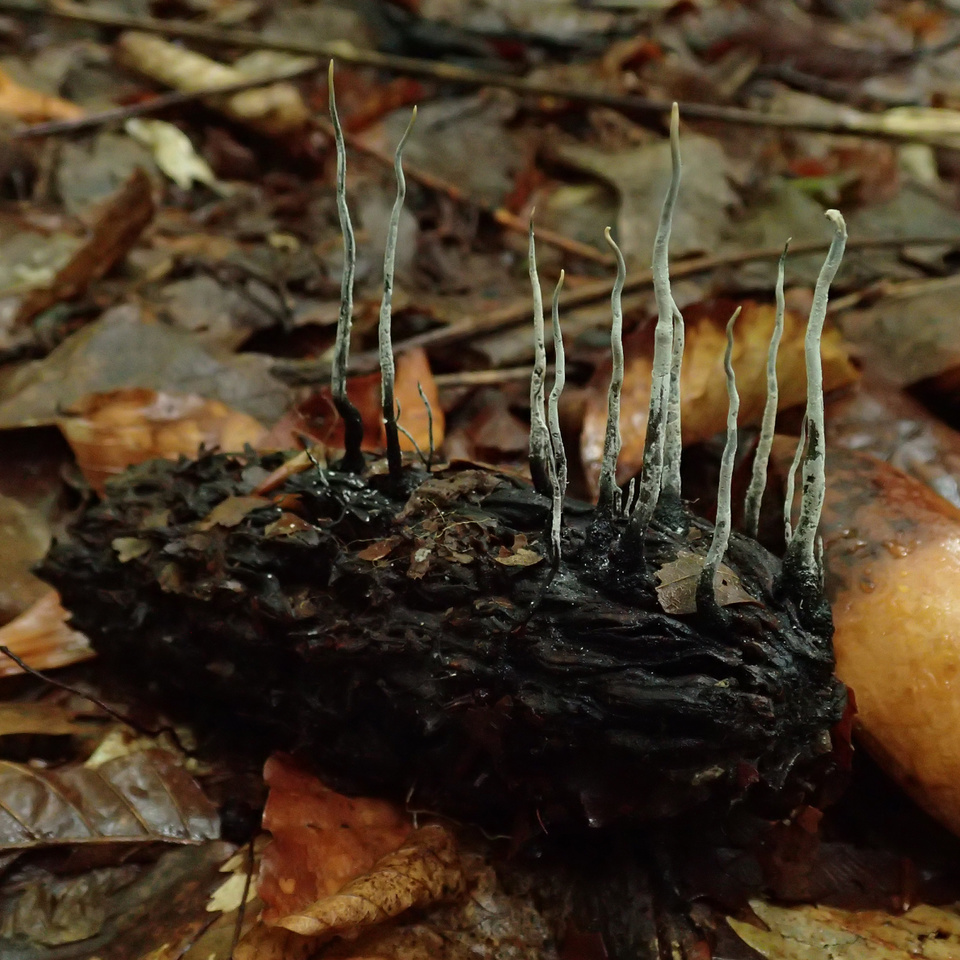 Grows on seeds of the Japanese white bark magnolia. As it ripens, it turns black.